The making of one of South Africa’s most successful yacht designers: Anton du Toit’s story

The making of one of South Africa’s most successful yacht designers: Anton du Toit’s story

For a man who translates billionaire dreams into line drawings, there is something surprisingly understated about Anton Du Toit. One of South Africa’s top yacht designers sits opposite me in a K-way sweater and nondescript shirt, framed by yacht designs on a pin-board behind his head. He is calm, courteous, and initially says very little, preferring to listen.

The man with the carbon fibre touch is measuring me, expert that he is, bit by bit and inside out, assessing the dimensions of the job at hand in the same expert manner that explains why his designs are earning accolades faster than a billfish through the Pacific. One suspects it is a habit that has thrust him onto the prow of global yacht design, where attention to detail requires powers of observation forged across decades of sailing experience. His Balance 526, a collaboration with Multihull company boss, Phil Berman and countryman Jonathan Paarman, won Cruising World Import Boat of the Year and also best Multihull Over 50 feet.  It has more eye-catching features than a Parisian fashion show, and the brains behind it is finally getting the recognition he deserves.

Even Anton’s office is under-stated, as if he prefers to stay out of the limelight. To find him one must navigate a maze of street lights and kerbs in Cape Town’s northern residential suburbs. There is no sign in front of his house, no billboard or Southern Spars mast sticking up above the chimney. Inside, his studio abuts a quiet garden and is neatly partitioned into half-a-dozen work units. It is here that Anton has produced some of his most celebrated designs, such as the Balance 526, the Two Oceans Open Ocean 800 and a fleet of other cruising and performance catamarans. It is here he also hopes to build on that success, expanding his operation at a time when many are cutting back.

However, to better understand the secret to Anton’s success involves looking past the front office to catch a glimpse of his extraordinary life-story, which includes 14 years sailing around the world on his father’s yacht, a journey that started when he was just 13 years old. Anton’s parents bought a Tartan 46 Sparkman & Stephens design with the proceeds from the sale of the arable portion of their farm in the KwaZulu-Natal midlands and set off on a family odyssey with their three children. Anton was in Grade 8 at the time, which remains the high-water mark of his formal education.

What he was to learn ‘on the fly’ from one country to the next ultimately proved far more valuable for his future career than a few extra years learning about Latin conjugation and famous Boer War battles. The straight-talking South African, who has zero formal design training, believes his practical training in the marinas and yacht ports of the world taught him most of what he needed to know. “I only did one year of high school,” Anton recalls. “My folks bought a boat in the States. We had to participate in an international race so as not to pay sales tax, so they sailed the boat back, took us out of boarding school and we did the 1976 Cape to Rio Race.”

The race turned out to be the start of their family travels, first to Mauritius and the Persian Gulf, then through the Suez Canal to Greece. When money ran low they did repair and maintenance work, picking up valuable skills and sailing experience. The du Toit Family ended up based semi-permanently in the US and the Caribbean. Anton believes there is merit in working your way up through the boat building supply chain: “In France we started doing work – varnishing other people’s boats or maintaining them. In Fort Lauderdale, we got friendly with a yacht broker; if he wanted to maintain a boat or sell a boat then Simon (Anton’s younger brother) and I would go off on our bicycles and varnish the boat.” “No school was involved in any of this – I think my parents gave up in Greece!”

It was in Greece that Anton first studied a book on yacht design: “I managed to persuade my parents to buy it for me and from then on I was keen on becoming a designer”. His passion was regularly fuelled by the sight of spectacular vessels arriving or departing, each one reshaping Anton’s nascent design style: “We were keen on boats and all the latest designs that came out. If a new boat came in we would always go in the dinghy, us brothers, and go and ask the guys if we could take a tour of the boat. We did that wherever we were – anchorages and marinas in Greece and Italy and wherever.”

Anton quickly realised he would need to supplement his practical skill with technical knowledge. Fortunately, he had access to libraries while based in the US: “I would spend my Saturdays and Sundays in the city library, studying textbooks on engineering – that is where I learnt all my engineering stuff from”, he recalls, adding that the more conventional route of yacht design school wasn’t available to him. “My father told me that if I didn’t get a matric he would not be sending me to university. It would have been fantastic to go to Southampton Yacht Design School, but it would also have cost a lot of money. That route wasn’t really available to me, so I just had to get on with it.” 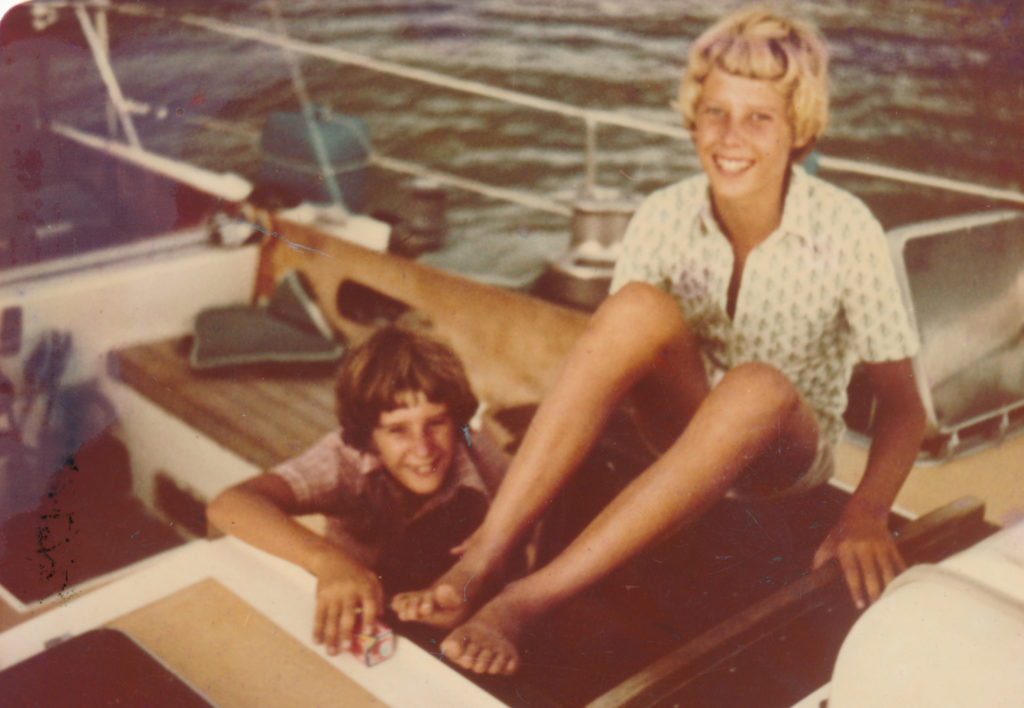 Anton with younger brother Simon during a 1976 South Atlantic crossing

The no-nonsense hands-on approach was clearly no deterrent for the young Anton, who was by then accustomed to doing things his own way. He credits his father, Pierre, with encouraging a do-it-yourself philosophy of life that continues to bear fruit: “You have to learn as you go along – if you want to know something you have to go out and find it.”

It was also an attitude that paid dividends when the family returned to Cape Town where he was able to gain valuable work experience with several local companies, starting off with Angelo Lavranos for two and a half years and culminating in a six-year stint with Southern Wind. These too were formative years, says Anton: “It was a helleva good experience. Everything you do at a boat yard like that, you just absorb it and use it in the future. That’s all it is about: finding out what you need to know.” 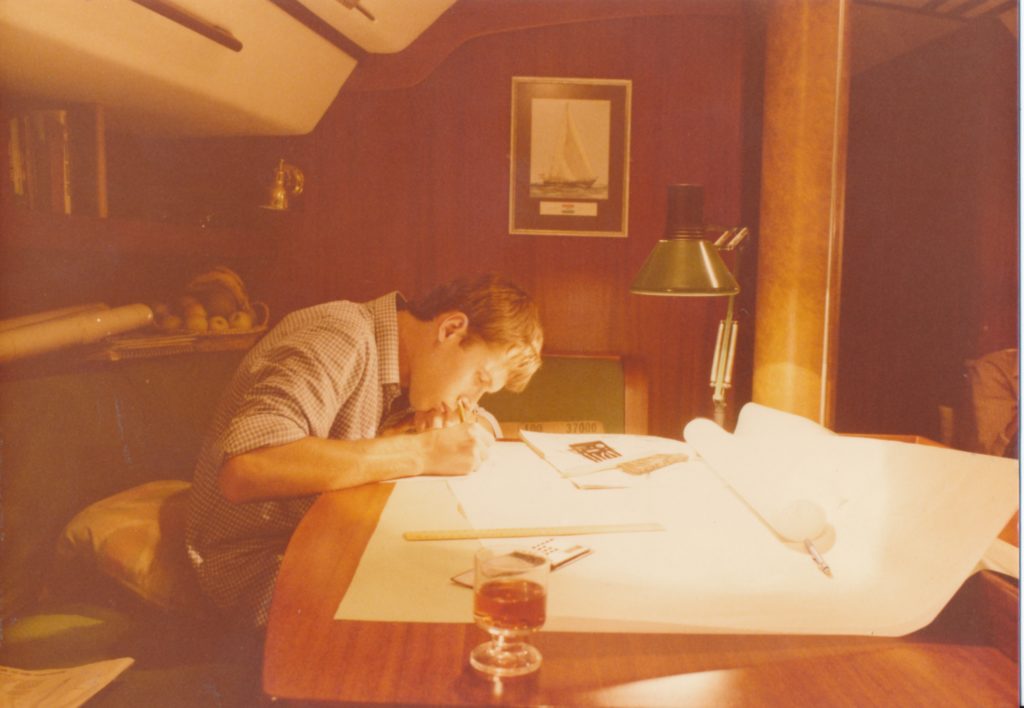 A young Anton, drawing in the saloon of Phayet

The same is true for boat building in general, Anton adds: “If you have to know something you find out what you need to know. At certain times you don’t have time to do it and then you have to get a consultant, but in general that is seldom the case.”

Anton is by no means the only practical designer who eschewed formal training; some of the biggest South African names in the business entered the profession via the proverbial back door, including John Shuttleworth and Angelo Lavranos.

Anton’s unconventional background is fondly remembered by one of his clients, Krasni Sutic, one of South Africa’s most experienced skippers. He recalls paying Anton and his brother the ‘princely sum’ of $10 to prepare his yacht for charter during the family’s years in St Thomas in the Caribbean: “I was not surprised, considering their integrity, that they divulged their new-found fortune to their father”, Sutic recalls. “I was even less surprised that he promptly appropriated the money, for food and lodging”, he said.

“Hearing that they had been working for no reward, I raised their pay to $20. Pierre got wind of this, and once more grabbed the loot. He claimed inflation was rampant, thus had to increase board. Fortunately, Dad relented and allocated their share to the boys. Anton wisely used his funds to pursue his dream of one day designing yachts. The rest is history”.

Would Anton ever give it all up again and head for the open ocean? Maybe.

Concludes Anton: “When I first got back I thought I never want to go cruising again. Now I want to.”

Which begs the question: if Anton could design a boat for himself, what would it be? No hesitation. “I already have the design in my head: a 45ft to 50ft mono-hull, traditional style boat with a modern under-body, a ‘Transpac sleeper’. Lots of open deck space, big cockpit to lounge around in, nice little coach roof, lots of sail and an open interior with no bulkheads”.

Keep a look out for him on the other side of the horizon.

Anton’s team has grown since this article was penned and he’s had to move into bigger premises, offices next to  Sparcraft Masts’s