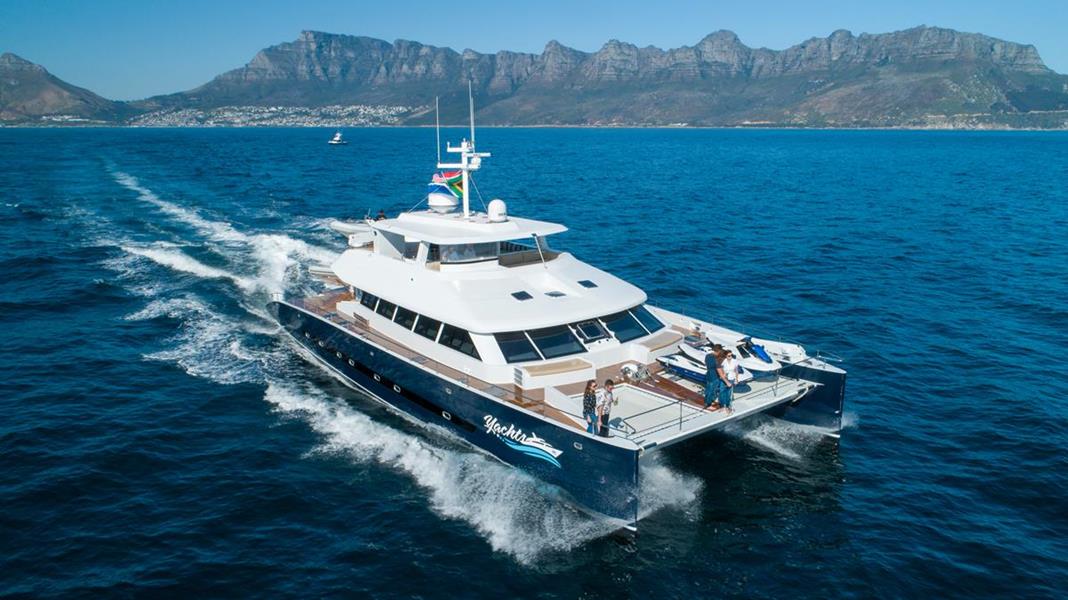 She is built by Two Oceans Marine Manufacturing. Founded in 1989, the company is one of only a few large custom catamaran manufacturers in the world, building power and sailing catamarans ranging from 60ft to 150ft.

The 850E is built in a sandwich construction, using epoxy E-glass with a PVC foam core and carbon fibre for local support and reinforcement structures.

The client had a specific vision for the 850E. She was designed to have wider hulls to accommodate transverse berths and larger cabins below deck. The interior layout, furniture design, décor and finishes were choices made to reflect the client’s lifestyle. Du Toit Yacht Design created her lines to be elegant and stylish and they are accentuated by the blue LED underwater lights that make her a spectacle at night.

The interior layout includes a spacious galley on the main deck, designed around the social aspects of cooking and preparing food; guests can interact with the cook or feel at home to be able to whip up something themselves. The galley has plenty of storage for dry foods as well as fridge and freezer space to allow for months of exploring. It is fitted with every modern appliance needed and endless SchemaR® countertop space which is a marine chef’s dream.

Careful attention was given to the interior finishes to create a space with a strong connection between interior and exterior living, but to still have a luxurious and comfortable feeling. This was achieved on the exterior by using Ralph Lauren fabrics for the daybeds and scatter cushions and by continuing the teak deck into the interior which is complimented by the furniture design. A sleek two-tone design, with white panels and a solid walnut insert. The lighting design was especially important to give the interior flexibility in mood and atmosphere.

Forward of the galley is a lounge and relaxation area with a large flat screen TV and state of the art entertainment system. The navigation station and vessel systems console are positioned on the port forward side of the vessel, at a small desk, which is mirrored to the starboard side that can be used as a working area.

The aft cockpit has been designed as the main living and dining area of the vessel with a large walnut table that can seat up to 10 guests. There are two large sunbeds for lounging during the day. The cockpit counters are equipped with a Vitifrigo double drawer fridge, three 125 l freezers and a prep area with a gas barbeque.

The second living area is the very spacious flybridge deck. This provides a comfortable upper lounge area, complete with a dining table, wet bar, ice machine, drinks fridge and sink. It is the perfect living space to serve canapés and light lunches. A full size jacuzzi and a day head complete the flybridge lounge guest area.

The Two Oceans 850E Power Catamaran has two luxurious double, en-suite cabins in both the port and starboard hulls, sleeping eight guests in five-star comfort. The wide, spacious hulls have accommodated transverse berths in the owners’ aft cabins. All mattresses in the boat are from Hästens, which provides the guests with extreme comfort. She has two en-suite crew cabins with their own showers in the front of both port and starboard hulls, accommodating up to four crew members comfortably.

The expansive exterior decks are beautifully finished in Burmese teak, and house the main motorised water toys. The Two Oceans 850E has one five metre custom RIB with a 70hp outboard engine, one 6.1 metre custom RIB with two 270 hp outboards and two Yamaha Wave runner jetskis, on a custom-made aluminium chock above the starboard trampoline. Large hydraulic cranes facilitate easy launching of the tenders and jetskis.

A pair of Cummins 610 hp diesel are the main engines that provide an economical cruising speed of 10 knots for long distance voyages, giving the vessel a range of over 3500 nautical miles and She has a maximum speed of 22 knots.

Her electrical systems are state-of-the-art, and she has an impressive systems room, accessible through louvre doors in the crew cabins.

The Two Oceans 850E Power Catamaran is the epitome of luxury cruising and yet another example of a successful collaboration between client, boat builder and yacht designer in a complete custom build.

The principle dimensions of the Two Oceans 850E Power Catamaran are: